A life of hope in a world destroyed by drugs

When Angelyn’s family fell apart, the weight of responsibility fell on her young shoulders.

A life of hope in a world destroyed by drugs

When Angelyn’s family fell apart, the weight of responsibility fell on her young shoulders.

The little girl splashed through muddy puddles on her way to school. Colourful buildings, thrown together with random bits of wood and corrugated iron, lined the streets. Angelyn lowered her eyes as she weaved between the neighbourhood children who didn’t go to school. Their parents saw no need for schooling. Some of the parents sold their children into prostitution, in a desperate attempt to find extra cash. Their pain numbed by drugs, these children had no hope for a better future. In the back streets of Cebu City, the Philippines, school is considered a privilege for the children who have hope.

Angelyn’s parents could afford to send her to school, but she didn’t know why. Their occupation was a shadowy secret, hidden from their children, their neighbours, and from the authorities. When people asked Angelyn what work her parents did, it was easier to invent a make-believe story than explain why she didn’t know the answer.

Even so, they were still living in poverty, and Angelyn had been registered with Compassion at the Loving My Neighbour Child Development Centre. Her caseworker at the centre, Joel, found that this shy little girl was doing exceptionally well at school and he wondered if she could become a leader who would have a positive influence on her community.

Before leaving for school one morning, Angelyn searched the house for her parents to ask for pocket money. Opening a door, she found her father with packets of ‘shabu’ (a low quality methamphetamine) laid out in front of him.

In their community, Angelyn often saw people selling and using drugs. She knew what her father was doing, and she knew how dangerous it was. The realisation that he was a drug dealer devastated her. She was angry that he put their family in danger, and confused about what she should do about it. But she didn’t dare ask for help.

The penalty for drug dealing was life in prison, and Angelyn couldn’t imagine what would happen to her family if she told someone and the police found out about her father.

Even though Angelyn kept quiet about what she saw, it wasn’t long before the police came to their home. Angelyn was babysitting a neighbour’s baby when she heard a commotion downstairs: voices yelling, furniture rolling across the floor, feet crashing up the stairs. Amid the noise, Angelyn could make out the word, “Police!” Her heart pounded. She wondered what she should do but she knew she needed to stay with the baby.

Her mother and father ran into her room. Her mother shoved something into her hand, as her husband jumped out the bedroom window. “Hide this!” her mother commanded, before following him through the window. Angelyn looked down at her hand and realised she was holding a bag of drugs. She quickly hid the bag under her bed-sheet just before the police entered the room, looking for her parents.

Angelyn’s dreams were shattered. She didn’t talk to the child development centre staff about it because she mistakenly thought that, if they knew the truth, they would reject her. As her hope faded, her attendance at the centre dropped off. She spent more time with her friends from the community, and, by the age of 12, she was drinking alcohol and frequenting nightclubs.

Seeing that Angelyn wasn’t coming to the Compassion project, Joel became worried. He knew the dangers she faced on the streets of Cebu. When he tried to call her, she rejected his calls. One day he found her and made a last attempt to encourage her to return to the care of Compassion. Reluctantly, she agreed to come to a youth camp.

During one of the camp meetings, Angelyn confessed to God. Like never before, she knew God was with her. She surrendered her pain, her confusion, and her life to Jesus.

Joel saw the difference in Angelyn immediately. As she became more consistent in coming to project days, she also developed her many talents. With Compassion’s help, she became a badminton champion, excelled in her school work, and enrolled in seminars to develop her singing voice. Before long, Angelyn joined the praise and worship team and was leading worship. The centre director, Beth, invited her to become part of their team of student leaders, and Angelyn enrolled in Bible college.

Angelyn’s father could see the difference in his young daughter. His faced beamed with joy when he proudly listed her achievements to his friends. He also noticed the change in her character; she was a strong, gracious young woman. When she encouraged him to abandon his criminal activity, he eventually agreed.

Angelyn was delighted but her joy was short-lived. Her father’s previous life soon caught up with him; he was arrested, charged and sent to jail.

With no husband and no income, Angelyn’s mother was in shock. She had no idea what to do next and her children suffered without the care of either parent. They begged for food from relatives but they were sent away because their relatives didn’t have enough food for themselves.

It was Angelyn who stepped in to fill the gap, caring for her younger sisters and brother, preparing their meals, and taking responsibility for their many needs. The physical and emotional strain soon took its toll on her health.

Her cough wouldn’t go away; she was tired, and feverish. Her Compassion caseworker sent her to the doctor. A chest x-ray revealed that Angelyn had succumbed to tuberculosis.

Fortunately, she didn’t have to fight the disease alone. Compassion paid for her medicine and treatment, and she gradually recovered. Even so, she’d missed too much study and she needed to cut back on her activities. She didn’t return to Bible college.

When she was well enough, Beth asked her to teach children at the child development centre. Angelyn took the role seriously, carefully planning lessons for her young students.

“When she teaches, she does it with all her heart,” says Beth. 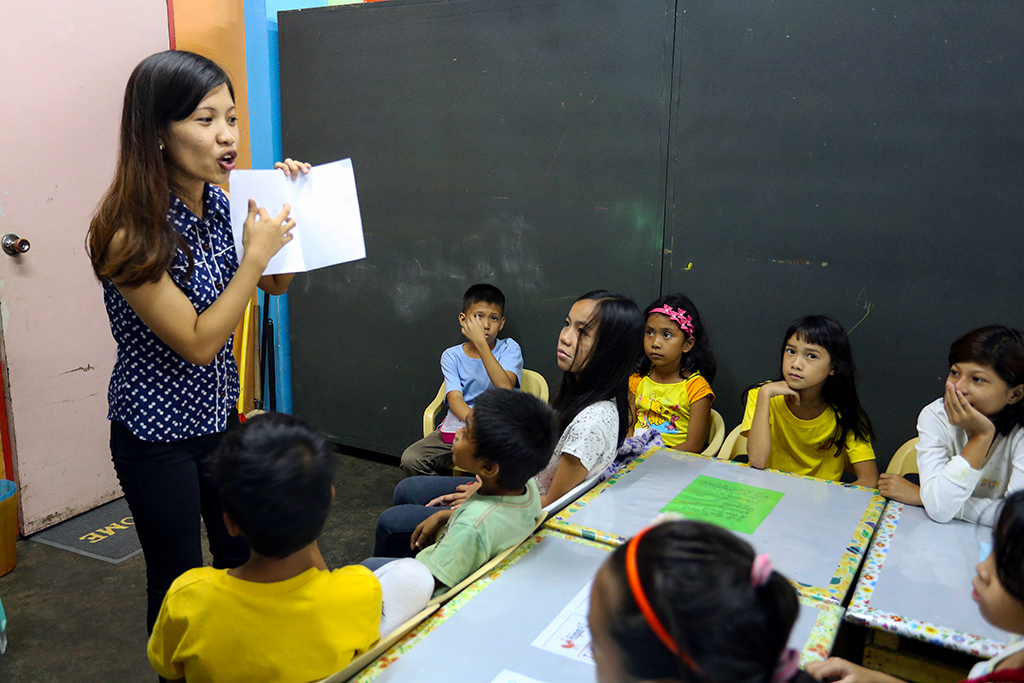 The children at the centre look up to Angelyn as a role model. Many of them live in the Inayawan landfill and their parents earn a meagre income, scavenging treasure from the mountains of rubbish. Angelyn encourages her students to finish school and to be a positive influence on their families and their community.

“Poverty is not a hindrance to success. God is always showing us a better way, providing the people who can help us,” Angelyn tells them.

At the age of 19, Angelyn is now leading worship for the congregation of the Cebu City Alliance Church. She continues to pray for her family and one day dreams they will all be in church, worshipping the Lord together. Her mother has already committed her life to Jesus and joins her at church. Although Angelyn struggles with what her parents did, she can understand why and has forgiven them.

“Unfortunately, they don’t have [much] because they didn’t finish their studies and they’re not [able to get a] job,” she says.

Angelyn’s story will one day end with the words, “happily ever after.” But now she finds her peace in God through worship. She understands exactly what Jesus meant when he said, “The thief comes only to steal and kill and destroy; I have come that they may have life, and have it to the full” (John 10:10).

Here are some things that Angelyn loves about Compassion:

You can bring hope into the life of a child like Angelyn.

This blog was originally published by our friends at Compassion Australia