How a Compassion sponsor gave hope.

How a Compassion sponsor gave hope.

Dry maize stalks dominate an arid piece of land near the foot of the scenic Mumoni Hills in Kitui County, Kenya. The rains haven’t sustained a good harvest for three years. The barn is almost empty and rodents are stealing the few grains that remain. Recently, a relentless honey badger vandalised the beehive and also made away with all three of the family’s chickens. Now, only a white goat remains – the one that 9-year-old Mwikali Kyalo received as a gift from her sponsor.

Every day after school, Mwikali feeds the goat the dry maize stalks. It looks healthy despite these lean times, and its loud bleats echo across the open plain. Mwikali answers back with her own, quieter version of the bleat.

Mwikali’s care for her goat knows no bounds. She accompanies her mother to fetch water six kilometres away. And when the nearest wells dry up, she makes longer, sometimes day-long, back-breaking trips. As Mwikali pours water in a big calabash and watches the goat have its fill, she is hopeful that it will flourish and multiply.

When Mwikali was registered into AIC Jericho Child Development Centre in 2011, David Kimathi, the project director, remembers extending his hand to greet a small, barefoot and malnourished child.

“Mwikali,” she answered in a small voice. She cast a lonely figure as she stretched out her tiny hand to greet him, before looking down and walking away, further revealing the sores on her head.

David explains the situation he found at Mwikali’s home, “The family struggled to put enough food on the table. To make ends meet, the eldest child stopped school at primary level and went in search of work to fend for the family.” 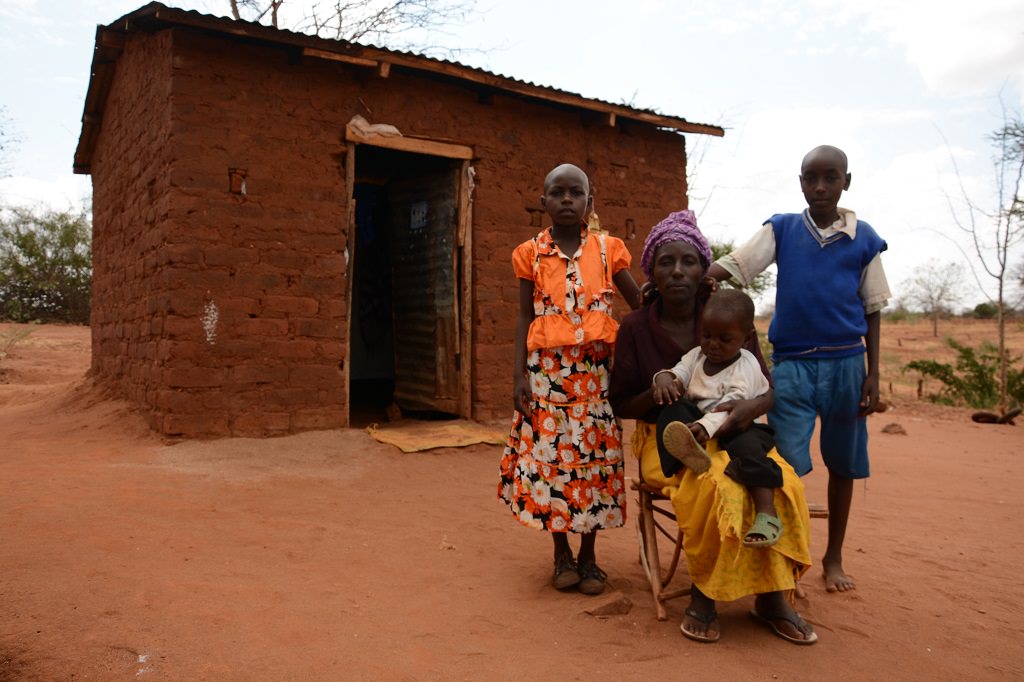 Mwikali’s mother Jane struggles to provide for her three children.

The empty clay pen where the family used to keep their chickens.

As the drought persisted, Mwikali’s father also sought a different source of livelihood as a security guard in the town of Mwingi, 50 kilometres away from home. His monthly income isn’t enough for him to make regular visits home. The last time he visited was during Christmas. Instead, he sends a small amount of money home each month to buy food and other household items.

This struggle cuts across the entire community. Many people have grown weary of waiting for better days, choosing instead to seek good fortunes from local witchdoctors.

“We have received lots of support from the project through my daughter, Mwikali,” says Jane Mumbe, Mwikali’s mother. “She has a school uniform and a pair of shoes. The project paid her school fee balance, helping us to focus on other areas of need.”

Project director David caring for the poorest children in Mumoni. 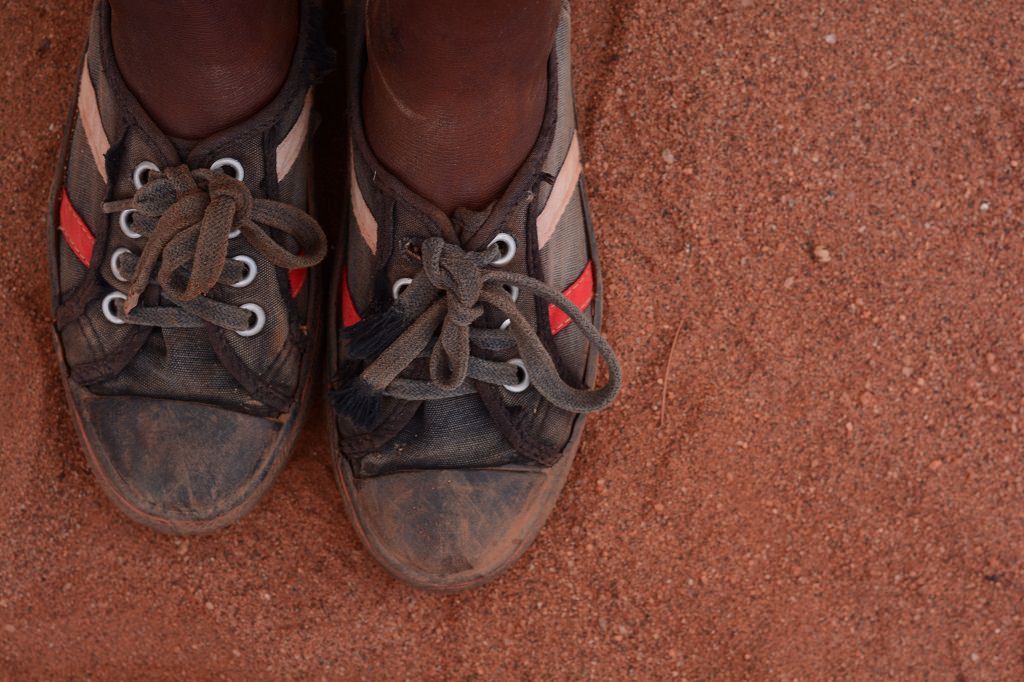 Mwikali is so proud of the shoes she received thanks to her sponsor.

Additionally, Mwikali’s health has steadily improved as a result of better nutrition. Every week she receives a balanced meal at the project. The family also receives additional domestic support of food, soap, certified seeds to plant and other assorted items to improve their well-being.

As Mwikali’s health and self-confidence have grown, so has her participation in programme activities.

David explains, “Mwikali is taller and healthier than when she first came. Her mother says that she’s the noisier one at home, because her confidence has grown so much. At the project she usually rallies other children to the playground, where she enjoys playing on the swings.” 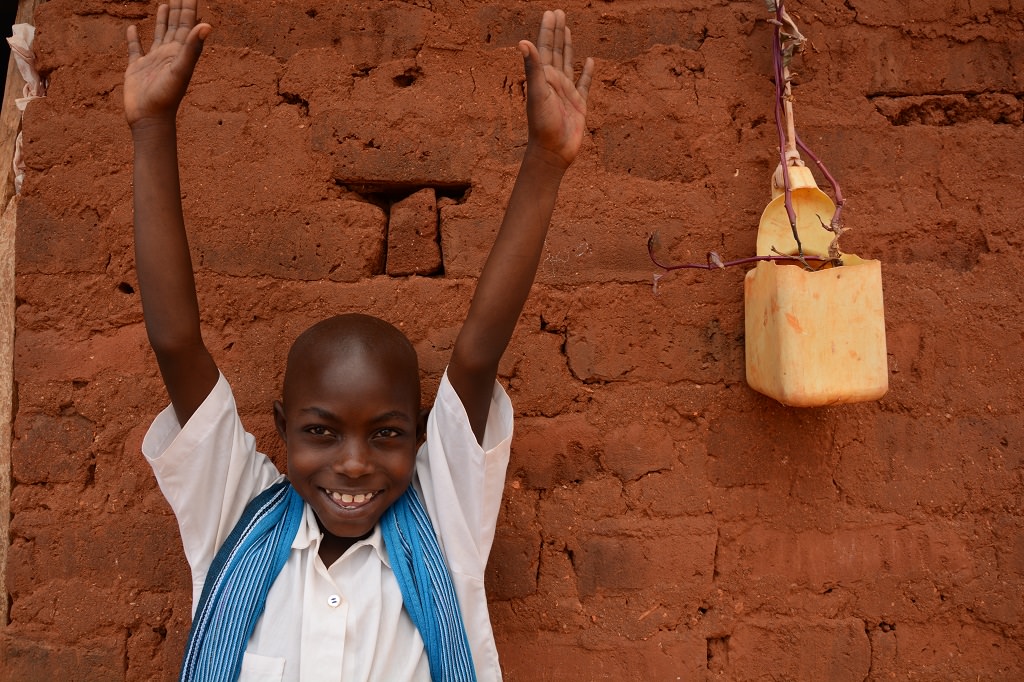 Mwikali is stronger and healthier thanks to the care she’s received from her project.

The project teaches children God’s word and helps them learn how to trust in Him for their future. Mwikali has been practising these principles at home and is leaving an impression on her family.

Jane is astounded by her little girl’s fervour in learning about God.

“Mwikali looks forward to Sunday School. She drags her siblings along with her and even offers to carry the youngest one on her back,” she says. “Mwikali also shares hopeful words from her sponsor and tells us about the lessons she learns at the project. She has taken it upon herself to pray for the needs of the family; recently she has been doing that a lot.”

Mwakali’s faith has inspired her mother to trust God. “Our prayer is to have rains and enough food, and for my husband to visit home more often. I personally hope to see my children succeed in their education,” says Jane.