“The Lord is my shepherd …”

Having been rocked by the deaths of his loved ones, Julius holds onto a verse that gives him hope for the future.

“The Lord is my shepherd …”

Having been rocked by the deaths of his loved ones, Julius holds onto a verse that gives him hope for the future.

Julius Oyalo left home in search of food. His clothes were worn and hunger pangs raided his empty stomach. He travelled to the bustling Luanda Market in western Kenya and began rummaging through rubbish heaps to find food thrown out by local hotels. Julius was only seven years old.

Having recently lost his mother, Julius and his brother had moved in with their elderly grandmother. As a peasant farmer, she had no way of providing for them so Julius decided to take matters into his own hands. At this young age, he already knew that the streets were a “cruel place”.

Eventually Julius’ grandmother found him and persuaded him to return to her. But more difficulties lay ahead.

No sooner had Julius returned home, than his grandmother became bedridden with an illness. Her health quickly deteriorated and Julius became her sole carer. His days were filled with chores including travelling to the nearest river to wash her dirty clothes and bedsheets.

Julius clearly remembers the moment when he noticed something was wrong. He couldn’t see his grandmother’s eyes moving. Julius called out to her, “Dani (grandmother), Dani, are you ok?”

The profound silence frightened him.

Julius called out to her again. But his grandmother’s reassuring voice was absent. He couldn’t hear a word.

Julius had experienced two deaths within the space of a year. He was grief-stricken and confused. He ran out of the house crying and calling for help.

A new but uncertain home

At the funeral, Julius was approached by his uncle, Wellington.

“My heart was not at rest knowing that the children were left alone,” explained Wellington. “I learnt that the closest relatives hadn’t taken them in, so I decided to go back and host them until we found a solution.”

It was a brave decision for Wellington and his wife, Zainabu. They only had a three-roomed mud house. And as peasant farmers with an average income of Ksh. 5000, they didn’t know how they were going to care for the two boys in addition to the five children of their own. 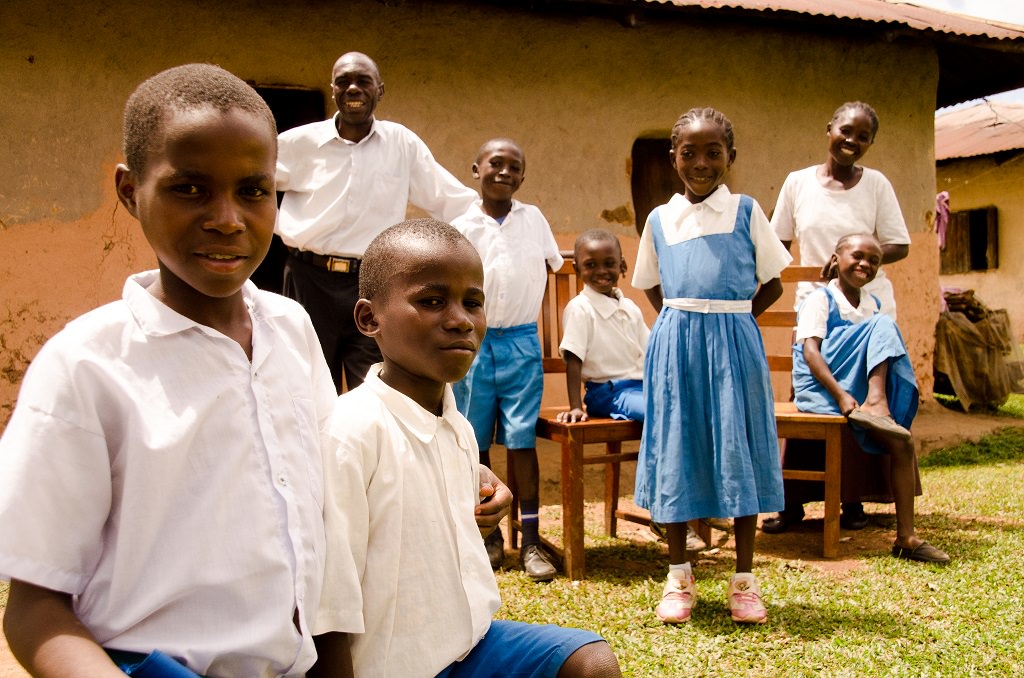 Wellington and his family.

“Their appetite was incontestable,” Wellington recalls. Julius and Joseph were used to having so little food that they ate as much as was available. They’d even pick up food crumbs from the table and often sneaked into the kitchen to scrape off food remains from the pans.”

Wellington and Zainabu pondered over how to help their newly-adopted children. Their rain-fed subsistent farming proved unreliable when the seasons disappointed. They even sold some goats to purchase food and meet other needs.

In 2007, help came. “We received visitors from Ebusiralo Church of God, who were seeking to recruit more needy children in the community,” describes Wellington who immediately enrolled Julius into the Compassion programme. “I prayed for Julius to be enrolled so that he could access medical intervention and start attending school.”

Petronila, director of the Compassion project run by Ebusiralo Church of God, recalls meeting Julius.  “He was so tiny and looked half his age. He had gone through a difficult period in his life after losing his mother and grandmother. We welcomed him, prayed for him and encouraged him.”

Thanks to his sponsor, Julius was also able to join Ebusiralo Primary School, next to the Compassion centre. He remembers his first day of school, “I was happy to join school. I wore my new shoes and uniform which I received from the project.”

It took time for Julius to feel at home. He was battling Kwashiorkor and intestinal worms, and had never been taught to read or write. His growth was stunted as the worms had sucked away valuable nutrients needed for his growth and development. Julius struggled for confidence and often faced teasing from other children when worms fell from his nose and mouth.

But week by week Julius’ church project gave him care and support. Week by week, he began to thrive. Compassion provided him with access to deworming medication, and gave the family food and water filters.

The worms reduced in number and eventually vanished. Julius’ hair regained its shine and he grew more confident in himself. He grew in strength and helped his siblings with herding goats and cultivating the small piece of land behind their house. 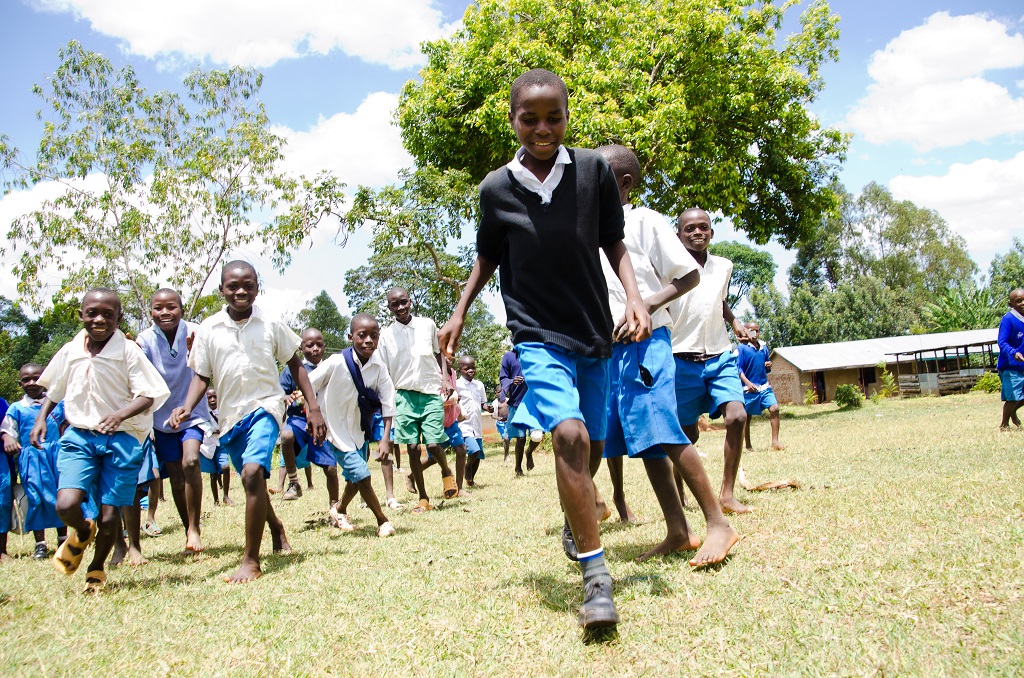 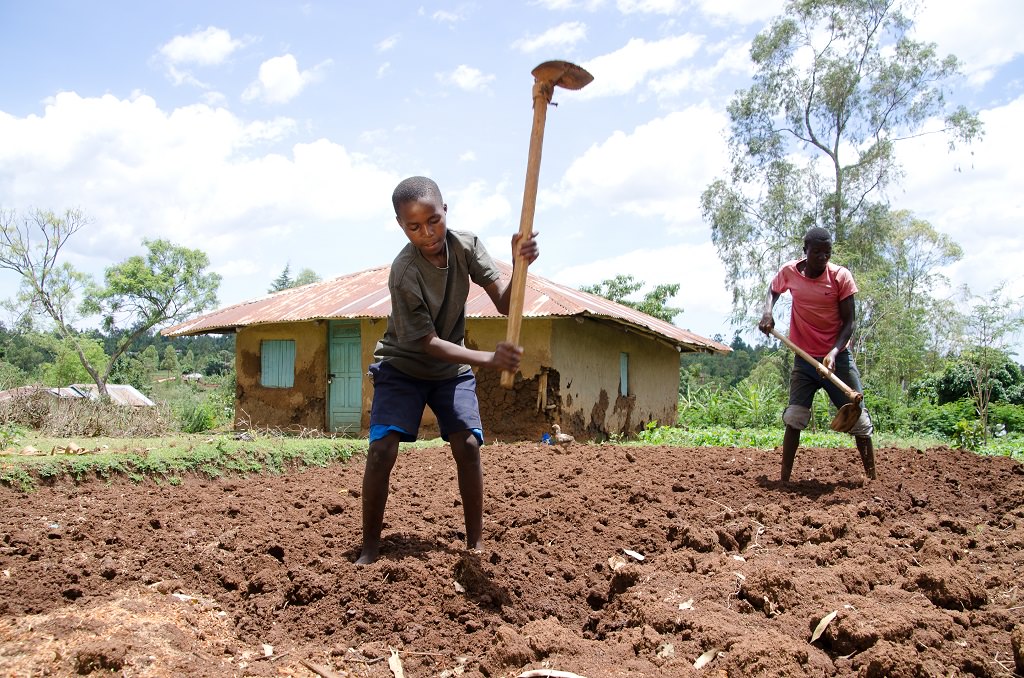 He is now strong enough to help his uncle's family grow food.

Though still a shy and soft-spoken boy, Julius expresses his love for his new family, and the Compassion project where he visits every week. “I’m happy because my uncle took us in. I also enjoy visiting the project on Saturdays because I have many friends there. I receive gifts from my sponsor and his letters encourage me to work hard in everything I do. I feel loved and appreciated.”

Julius treasures the Bible he was given at his project.

Having been rocked by the deaths of his loved ones, Julius holds onto a verse that gives him hope for the future. He lies on his bed, below a mosquito net that’s safely secured on the ceiling, and reads one of his favourite passages from his Good News Bible. “Psalm 23:1 says,” he reads, “The Lord is my shepherd; He gives me everything I need …”

God has given Julius a place he can call home.